Some 598 million international tourists were on the move worldwide in the first half of 2017 some 36 million more than in the same period in 2016. At 6% growth was well above the trend of recent years making the current January-June period the strongest half-year since 2010. 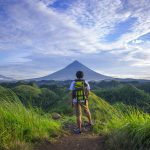